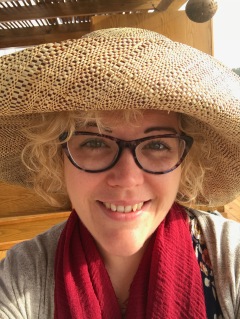 Erin Le Clerc is as fit as a flea, mad as a cut snake, and probably a sandwich short of a picnic. She grew up with seven siblings, three ghosts, two eccentric parents, and a multitude of farm animals in a crumbling abandoned hospital in the suburbs. This vastly informed her imagination!

Erin is tremendously proud of her Australian “bush heritage,” which she inherited from her Nana Maureen – Australia’s Champion Swiss Yodeller in the 1940s – the subject of her debut picture book ‘I’ve Got A Cow Called Maureen’, which was released by Clear Fork Publishing in March 2019.

Her greatest dream is to live in a dahabiya boat and cruise the Nile, writing books and digging up relics Amelia Peabody style! She got to live this dream once for 8 glorious days and can’t wait to return to Egypt.

Erin spends her “9 to 5” working as a psychologist, and her “5 to 9” writing stories filled with adventure and fun!